The Petition of some Persian Baha'is in 1867

In Heritage of Light, The Spiritual Destiny of America, Janet A. Khan places the little-known piece of history below in context.

[Not to be overlooked in her book is Chapter 2, 'The Role of the Martyr,' which includes the following subheadings: 'Characteristics of the Martyr,' 'Distinction between Martyrdom and Suicide Terrorism,' 'Baha'i Conceptions of Martyrdom,' and 'Dawn-Breakers of the Heroic Age.' Her exposition there in Chapter 2, in but some eighteen pages, could  prove useful as the Baha'i Faith comes under increasing scrutiny and attacks.]

'From the earliest days of the Baha'i Faith, the Persian Baha'is sought the protection and and intervention of the American government. Prior to the revelation of the Kitab-i-Aqdas and almost a quarter of a century before the introduction of the Baha'i Faith to North America, on 16 March 1867, a group of fifty-three Baha'is in the small city of Shushtar affixed their personal seals on a petition addressed to the United States Congress, and requested its assistance in alleviating the imprisonment and exile of Baha'u'llah. In the latter part of the twentieth century, the historic document was located in the United States government archives. The petition, which was written in Arabic, was apparently entrusted to a German traveler in Baghdad. The traveler sent the document to Beirut where it found its way into the hands of the American Consul, who forwarded it along with an English translation to the Secretary of State in Washington, D.C. in July 1867. The petition informs the representatives of the government about the advent of "a perfect man and a learned sage," summarizes His teachings, describes the opposition to which His Faith has been subjected, mentions His exiles, and invites Congress to send "a judicious representative" to inquire into the case with a view to finding a way "to bring that oppressed person relief from tyranny and oppression."* While there does not appear to be any clear evidence that the United States government took steps to respond to the petition, the fact that the appeal was made illustrates the remarkable confidence placed in the American nation by the less fortunate and needy peoples of the world. It also foreshadows the actions undertaken in later years by the American Baha'is in their attempts to alleviate the persecutions that continue, intermittently, to be inflicted on them.'

(Janet A. Khan, Heritage of Light, The Spiritual Destiny of America, p. 280 and 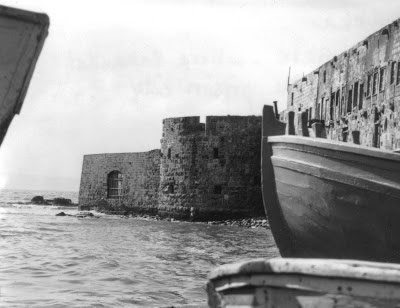 [In the year following the petition, Baha'u'llah, accompanied by some of His family and followers, was banished yet again. After successive exiles from Tehran to Baghdad, to Constantinople, to Adrianople, this time He was sent to prison in Akka, Palestine. On 31 August 1868, they were brought ashore near ‘Akká's sea gate — one of only two entrances to the fortress city.]