Tihran Time and the Baha'i Calendar 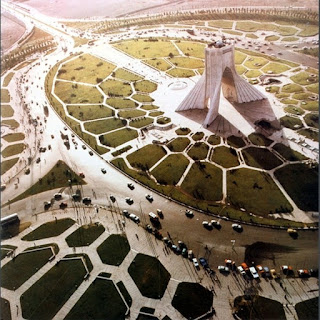 “We have decided that Tihran, the birthplace of the Abha Beauty, will be the spot on the earth that will serve as the standard for determining, by means of astronomical computations from reliable sources, the moment of the vernal equinox in the northern hemisphere and thereby the day of Naw-Ruz for the Baha'i world.”

Tihran Has Been Set as a Standard for Time

The manifest wisdom and inevitability of the landmark announcement from the Universal House of Justice, quoted above, shines forth in the quotations below.

[Emphasis added in the quotations below.]

...the Sun of Truth arose in the city of Tihran -- a city which, by reason of so rare a privilege conferred upon it, had been glorified by the Báb as the "Holy Land," and surnamed by Bahá'u'lláh "the Mother of the world," the "Day-spring of Light," the "Dawning-Place of the signs of the Lord," the "Source of the joy of all mankind."

A Revelation, hailed as the promise and crowning glory of past ages and centuries, as the consummation of all the Dispensations within the Adamic Cycle, inaugurating an era of at least a thousand years' duration, and a cycle destined to last no less than five thousand centuries, signalizing the end of the Prophetic Era and the beginning of the Era of Fulfillment, unsurpassed alike in the duration of its Author's ministry and the fecundity and splendor of His mission -- such a Revelation was...born amidst the darkness of a subterranean dungeon in Tihran...
(Shoghi Effendi, God Passes By, p. 100) 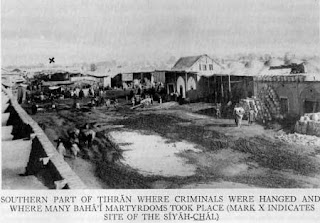 The second period (1853-1892) [“The Ministry of Baha’u’llah”] derives its inspiration from the august figure of Bahá'u'lláh, preeminent in holiness, awesome in the majesty of His strength and power, unapproachable in the transcendent brightness of His glory. It opens with the first stirrings, in the soul of Bahá'u'lláh while in the Siyah-Chal of Tihran, of the Revelation anticipated by the Báb...
(Shoghi Effendi, God Passes By, p. xiv)

LV. Call thou to remembrance, O Land of Ta (Tihran), the former days in which thy Lord had made thee the seat of His throne, and had enveloped thee with the effulgence of His glory. How vast the number of those sanctified beings, those symbols of certitude, who, in their great love for thee, have laid down their lives and sacrificed their all for thy sake! Joy be to thee, and blissfulness to them that inhabit thee. I testify that out of thee, as every discerning heart knoweth, proceedeth the living breath of Him Who is the Desire of the world. In thee the Unseen hath been revealed, and out of thee hath gone forth that which lay hid from the eyes of men. Which one of the multitude of thy sincere lovers shall We remember, whose blood hath been shed within thy gates, and whose dust is now concealed beneath thy soil? The sweet savors of God have unceasingly been wafted, and shall everlastingly continue to be wafted upon thee. Our Pen is moved to commemorate thee, and to extol the victims of tyranny, those men and women that sleep beneath thy dust.

Among them is Our own sister, whom We now call to mind as a token of Our fidelity, and as proof of Our loving-kindness, unto her. How piteous was her plight! In what a state of resignation she returned to her God! We, alone, in Our all-encompassing knowledge, have known it.

O Land of Ta! Thou art still, through the grace of God, a center around which His beloved ones have gathered. Happy are they; happy every refugee that seeketh thy shelter, in his sufferings in the path of God, the Lord of this wondrous Day!

LVI. Let nothing grieve thee, O Land of Ta (Tihran), for God hath chosen thee to be the source of the joy of all mankind. He shall, if it be His Will, bless thy throne with one who will rule with justice, who will gather together the flock of God which the wolves have scattered. Such a ruler will, with joy and gladness, turn his face towards, and extend his favors unto, the people of Baha. He indeed is accounted in the sight of God as a jewel among men. Upon him rest forever the glory of God, and the glory of all that dwell in the kingdom of His revelation.

Rejoice with great joy, for God hath made thee "the Day Spring of His light," inasmuch as within thee was born the Manifestation of His Glory. Be thou glad for this name that hath been conferred upon thee -- a name through which the Day Star of grace hath shed its splendor, through which both earth and heaven have been illumined.

Ere long will the state of affairs within thee be changed, and the reins of power fall into the hands of the people. Verily, thy Lord is the All-Knowing. His authority embraceth all things. Rest thou assured in the gracious favor of thy Lord. The eye of His loving-kindness shall everlastingly be directed towards thee. The day is approaching when thy agitation will have been transmuted into peace and quiet calm. Thus hath it been decreed in the wondrous Book.

LXIII. O thou whose face is turned towards Me! As soon as thine eyes behold from afar My native city (Tihran), stand thou and say: I am come to thee out of the Prison, O Land of Ta, with tidings from God, the Help in Peril, the Self-Subsisting. I announce unto thee, O mother of the world and fountain of light unto all its peoples, the tender mercies of thy Lord, and greet thee in the name of Him Who is the Eternal Truth, the Knower of things unseen. I testify that within thee He Who is the Hidden Name was revealed, and the Unseen Treasure uncovered. Through thee the secret of all things, be they of the past or of the future, hath been unfolded.

O Land of Ta! He Who is the Lord of Names remembereth thee in His glorious station. Thou wert the Day Spring of the Cause of God, the fountain of His Revelation, the manifestation of His Most Great Name -- a Name that hath caused the hearts and souls of men to tremble. How vast the number of those men and women, those victims of tyranny, that have, within thy walls, laid down their lives in the path of God, and been buried beneath thy dust with such cruelty as to cause every honored servant of God to bemoan their plight.

It is the city in which the sweet savors of reunion have breathed, which have caused the sincere lovers of God to draw nigh unto Him, and to gain access to the Habitation of holiness and beauty. Happy is the wayfarer that directeth his steps towards this city, that gaineth admittance into it, and quaffeth the wine of reunion, through the outpouring grace of his Lord, the Gracious, the All-Praised.

I am come to thee, O land of the heart's desire, with tidings from God, and announce to thee His gracious favor and mercy, and greet and magnify thee in His name. He, in truth, is of immense bounteousness and goodness. Blessed be the man that turneth his face towards thee, that perceiveth from thee the fragrance of God's Presence, the Lord of all worlds. His glory be on thee, and the brightness of His light envelop thee, inasmuch as God hath made thee a paradise unto His servants, and proclaimed thee to be the blest and sacred land of which He, Himself, hath made mention in the Books which His Prophets and Messengers have revealed.

Through thee, O land of resplendent glory, the ensign, "There is none other God but Him," hath been unfurled, and the standard, "Verily I am the Truth, the Knower of things unseen," been hoisted. It behoveth every one that visiteth thee to glory in thee and in them that inhabit thee, that have branched from My Tree, who are the leaves thereof, who are the signs of My glory, who follow Me and are My lovers, and who, with the most mighty determination, have turned their faces in the direction of My glorious station.

...this Servant journeyed from the Seat of Sovereignty [Tihran]...

Baha’u’llah shared an Islamic tradition from centuries before which referenced the environs of Tihran as the site of momentous happenings:

Moreover, observe how these things that have come to pass, and the acts which have been perpetrated, have all been mentioned in former traditions. Even as it hath been recorded in the "Rawdiy-i-Kafi," concerning "Zawra'." In the "Rawdiy-i-Kafi" it is related of Mu'aviyih, son of Vahhab, that Abu-'Abdi'llah hath spoken: "Knowest thou Zawra'?" I said: "May my life be a sacrifice unto thee! They say it is Baghdad." "Nay," he answered. And then added: "Hast thou entered the city of Rayy?",[1] to which I made reply: "Yea, I have entered it." Whereupon, He enquired: "Didst thou visit the cattle-market?" "Yea," I answered. He said: "Hast thou seen the black mountain on the right hand side of the road? The same is Zawra'. There shall eighty men, of the children of certain ones, be slain, all of whom are worthy to be called caliphs." "Who will slay them?" I asked. He made reply: "The children of Persia!"
[1 Ancient city near which Tihran is built.]

Moreover, we see below that Tihran has also been implicated in determining the timing for the future appearance of the next Manifestation of God:

62. Whoso layeth claim to a Revelation direct from God, ere the expiration of a full thousand years # 37

The Dispensation of Bahá'u'lláh will last until the coming of the next Manifestation of God, Whose advent will not take place before at least "a full thousand years" will have elapsed. Bahá'u'lláh cautions against ascribing to "this verse" anything other than its "obvious meaning", and in one of His Tablets, He specifies that "each year" of this thousand year period consists of "twelve months according to the Qur'án, and of nineteen months of nineteen days each, according to the Bayan".

The intimation of His Revelation to Bahá'u'lláh in the Siyah-Chal of Tihran, in October 1852, marks the birth of His Prophetic Mission and hence the commencement of the one thousand years or more that must elapse before the appearance of the next Manifestation of God.